46 replies to this topic

Ty nice patch with awesome event.
Can i request 'Queen Raveena wings' in the next patch?
I saw anyone equiping it and it was so pretty to me

Please, check the item below. Wasn't it supposed to be refined for MA instead of AP? 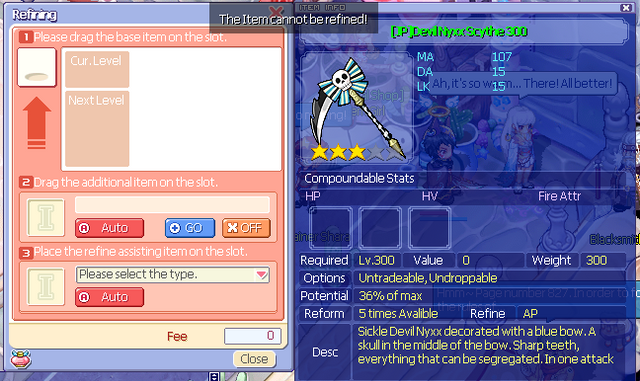 Yes, this should be refined for MA. I will put it in item list for fixing.

Hi, I don't know if it's possible but I suggest: can we delete or loosen the level limit of the Treasure Hunting quests?

Unlike boss hunt, treasure hunt has no necessity to limit a level, I think.

I was collecting the old maps in Oops Wharf, but when I leveled up over 160, I found that I can't do the quest anymore... I regretted but it was too late to set back

If the Treasure Hunting quests are so many that we can't adjust 'em all, only those two would be enough for me

Thanks for the reply! I will wait gladly

Also tagged with one or more of these keywords: buffalo, drill event, rto box