35 replies to this topic I have 10 event 2019 Mystery Boxes from the spring events, World Star II Boxes, and 5 Million Galder checks from winter left over.

How this will work (rules):

This will be a simple giveaway all you need to do is answer our question and leave your ign.

Make sure your answer is at least 2 sentences. It can be more. Show a level of care to answering the question.

You can only enter once.

What will be received:

Every person will receive two 5 Million Galder Checks in the in game mail.

10 People will receive a 2019 Mystery Box through in game mail.

There will be 15 winners selected by the staff.

Question: What kind of things do you wish to see on the 6th year anniversary patch in august next month? (examples: rewards, events, all ideas are welcome). It can be wishful thinking,

Answers can overlap with other people. You may agree with others.

I will like the response once I have scene it. -Mizzo

Make the magic type as strong as power.then more people will play magician.

make a new event map start drilling event where aoto drilling is not available(or u cant carry pet in here),players will have to drill by themself,thats interesting when they find the item they need and will probobly spend their days in it（depond on the reward）

the rewards can be some specially made equips or something else(maybe elixers etc).

all what i saw is the auto drilling destroyed this game.auto drilling should only work on lv up or doing quests. not for getting charged items or rare resources.

Again, Trickster is Trickster because it can drill !!! But the auto drilling ruined it !!!! all the thing can be found in drilling are no more than junk!

Hello. We need your ign. Also use only one post in the future.  I have condensed your posts into one. -Mizzo

Since there has been the 5th anniversary set, 3rd anniversary set wings, maybe this time round we can get a 6th anniversary face? Maybe a low level all-attribute compoundable face that will be eliminated by the time you reach 240 for glasses and 290 for the different mask. & also the boxes of different boss pet, event wise I really hope there can be some elixirs involved

, maybe dice event or RTO boxes, a hunt-drill type of event that is doable by all.

Also,I have a wish to see God and Legendary Anvils in the event rewards,They are expensive rightnow and I can't afford to buy it :/

One last thing i thought we can have for the anniversary is like Nihon's said,Some special set or just any equipment,Maybe can it be lv 150 or 250 ((:

Have a nice month :3

I enjoy collecting the item with 'no use'. (such as fanta fish's water drop jewel, popo's potato chip...)

The quest items are recognized as useful stuff by many players, but most of these misc. items are forgotten and abandoned.

I think, this game's many interesting and delicate items have worth to be shine.

If the required item for exchange is these kind of misc. item, people will pay more attention to various kinds of 'not useful' items.

Also, it should be 'less amount & more kinds'.

And I'll be glad if the rewards are the contents of RTO box.

I was not able to play game during that RTO box season and never got one...... (cry)

Additional out-of-the-blue suggestion/dream: (Hoping this will arrive in the incoming future generations of TO *crosses fingers* )

3. I know this is weird but can we have an extra quests for those married couples it seems that if you get married, there's nothing new to do. For every level a couple gets (if they finish a lot of quests), they'll get an item / box / Private shop mats, etc.

4. can we have pet slot expansion option also. *praying*

A mix of hunting and drilling like a poppuri event or last summers candy basket event that give motivation to players to hunt more actively than drill. Preferably the exchange or the community reward could have some or all the elixirs types, anvils, repairs, refine and drop rate cards (all tiers of it), repairs, gem, Nates. Most importantly, for the busy full time or part time studying college students that could be potentially be working as well, and also the full time working individuals potentially have an earlier patch first week of August so that more players can be engaged in the event.

I'd like to see the a few drilling events again like "Emerald Box Event" or "RTO 1,2 & 3 Box". Right now our server is just the best one around, but our events are kinda sucks *no ofenses, I know you guys are doing your best* but thats the reality of the events. I've seen just events with low lv rewards and our actual community is mostly high lv so the "miliage / recycle ticket" reason is not always worth. :/
Well, thank you for all the service and I hope you guys can see it anytime soon

Hello clowns and fairies, I know everyone is asking for myshop stuff and gears which are always the most popular but typical request.

I feel like even though as a returning player for 2 months after years of not playing, I pretty much see the same actual ACTIVE players in game who engage with each other and not just doing the rinse-repeat cycle of Dailies.

Maybe if we can have an interactive event that does not involve ONLY hunting-drilling which are easily abused but more community based and teamwork? (hears sudden animal whining because **** everyone but yourself right ? xd calm down people!)

I wanna see a fashion event for once since everyone spends so much on skins and looks with multiple sets of outfits and to see for once a game honouring a queer themed event which i have never seen before in any online game since its Pride season.

Perhaps since not everyone uses Myshop Fashion, it will be a complementary look if you have it but not counted as part of the judgement.

To make it accessible for everyone, they can use any GEAR + PET + HAIR COLOUR to qualify for a LOOK.

It could be set  for a one time live event but participants need to be registered through a forum post via a list to make it easier to organize. You cant get to a show if you arent invited darling.

Winners will be based off GM choice for top 10 looks. Possible to introduce categories / themes to give more players chance.

I was thinking of a party based event where teamwork is rewarded by killing random spawns of MINI MOD BASED BOSS  which you can submit to an npc for reward once a day.

You need to kill total of X of Bosses in selected maps to complete the quest.

Maybe make attribute not effective or increased Resistance of boss to make it challenging and fun.

Reward : Giftbox with multiple random gift or Exchange based reward for each party member

I was thinking about PvP being kinda dead and want to revive the fun in trolling other players, but instead of killing and causing ego rifts, i want a funny silly one instead.

We can have 2 squads face each other off in rounds to the top  in a unique map where everyone gets to use SKUNK POUCH , and other skills + sprints are deactivated.

In the event, players will work together to chase and skunk the enemy squad until everyone is rounded up, first squad to skunk the entire enemy team wins.

Perhaps for more creativity and variety, other CC skills can be introduced too like Faint.

CUSTOM MAP : a map that is not open space so you can hide and be strategic and run away as well

SPRINT BOOST MOB : special mob with 1 HP will spawn randomly to give short duration of speed boost to killer to help with chase.

I have always loved the cute emojis of the game and thought if we can have card battles why not an emoji matching versus Mods in multiple rounds.

Type of Emoji : 3 types that are very different

5) Player not within Mod's circle gets warped

We could have special circles on the ground  representing each emoji + MOD will be hiding in the correct one every round.

Players need to be in the right circle to keep going, last one standing wins , this way we can keep it simple and all can play at once

Reward : Since its anniversary, i think there should be participation reward for everyone who lost ( something cute like Hairdye ticket or Flicker drill ) + Last one standing Winners reward

The event I would like to see here again is the: Event Dice . where Hunt or Drill for Dice Star Gift Boxes.
It was the best event I've ever had in my opinion.
And it was exactly one year ago in the 5th Anniversary. please make this event with the same rewards. Hmm.. im thinking of the answwr lol will edit when i make up my mind

Also some X/O quiz would be funny to do

I’d like to see again the Dice Event was the best in my opinion the rewards item were good and the drop rate of the stall also. I also wanted to have the RTO event I do not know what it was because it was not in my time but I know that the rewards were great had to be something very daring that year.

Hi! Well, I agree with what my colleagues said up there. I think the Poppuri Event is something great, cool and it tends to involve the whole server. It is very beautiful to see people engaged in collecting the boxes.

However, there is one thing I was thinking while walking through Ceremony and Desert Beach. I think events that are conducted by the server staff and the players would be cool too, and it's something I have not seen yet (though I'm here since last month). A quiz with a GM or even a PvP tournament, or hunting monsters on a map could be cool for everyone.

Aaaand, since it's the sixth anniversary, I do not think anyone would complain about winning that fireworks skill ....... ~ and how about winning some items while we all celebrate the anniversary one day at Event Garden? I remember they did this from time to time on the original server.

Anyway, it's just an idea. I really like things that involve people. Thanks for reading!

I want 1st Anniversary skill card& Love of Choco skill card as an event reward. These items were once available from the Carved Wooden Box, but since the February patch, they are now available only through the trade of users. However, 1st skill is an important skill for magic types in pvp & pve and Love of Choco is a skill needed to have fun with friends. So I hope we have a chance to get these skill cards.

I would like to see the RTO box event again. It was really such an awesome event. I also wanna see CBS on webshop again and some discount on myshop points perhaps?

Something like the RTO box event that replenishes the economy again. I feel bad for anyone I reccommend the server to because it's incredibly hard to scavenge myshop items for reasonable prices now to get to where the current high levels are at.

Check out my guardian guide. My friend Z made this profile picture! Check her services out here! 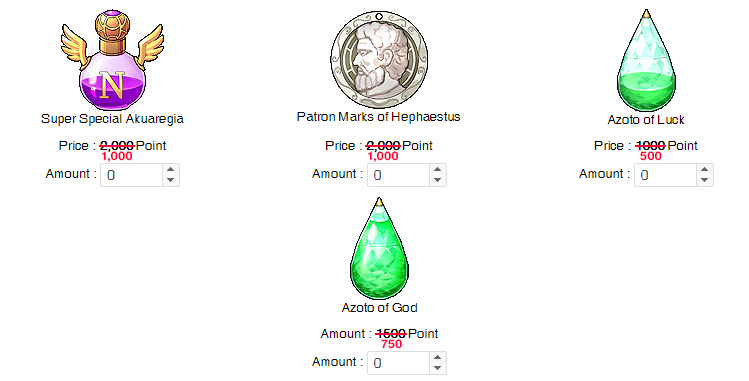 I want have Hibiscus Accessory T0T