65 replies to this topic

if the thread is still up for suggestion, we sheeps/dragons would also like vivid blue boxes, the one with naked impact items. Otherwise, I will really appreciate it if you can let us know when it will be back, thank you and keep on doing what you do!

I usually look at suggestions/requests in patch note up to the 20th of the month to include in item list for the next month. Item list is usually submitted to GM on 20th or within the next few days of the 20th. So, if you want to be sure I look at your suggestion, please make sure to post before 20th. Posts after the 20th, I may look at them for the next month's item list. Or sometimes I don't if there are many new suggestions that come in afterwards in the new patch note.

I appreciate all the suggestions but I do not guarantee that all will be accepted. Sometimes I post to GM but he may not accept them even if they are included in my item list.

I also want players, especially those who did not play in the official English North American servers (Jewelia & Fantasia), to understand that in our little server, we have given so much more to the players. MyShop items made available through event rewards. MyShop points that could be won by entering forum events. Functions such as making items tradeable. And more. Whereas in the official servers, there was no way in hell you could have gotten MyShop items without buying MyShop points.

I played in Fantasia for 4+ years until it closed in February 2013. My character there, Arantir, was the 6th char to gain level 400, and I was the first to get to level 400 by completing all the normal and episode quests in the game. The other players who got to level 400 before me had gotten there by power-levelling. Back then, it was very difficult to gain levels because EXP rate was low. Definitely, the official servers were more difficult to play compared to our server here. (Because later, the ranking didn't reflect the timing of when people got up to level 400; Arantir was not shown at No.6 in the official ranking; but I was definitely among the first few to get to level 400; the others were my friends, such as Laharlx, MysticGundress, MysticEdora, etc).

As a player, I appreciate what we have in our server, because I have experienced how hard it was to play in the official server, and how stingy the official server was about giving players good items for free (free = as event rewards). I spent USD250.00 every month throughout the duration that I played in Fantasia (the max limit allowed by PayPal) just to buy stuff like repair powders and elixirs for refining and comping. I became a boss hunter just to get legendary uniques, which were about the best equip available in the server. When Fantasia closed, I was the No.1 boss hunter for Soki and Queen Odinea (those who could search archive may be able to find these records; I wished I had screenshotted them before Fantasia closed).

Because we do not have the source code for this game, our ability to do things to this game is limited. We may be able to break some of the codes, but then things may go wrong. Some are fixable; some are not and may indeed create more problems. So I hope you guys understand that we cannot entertain everything that you ask for.

Recently, we have changed cooldown & duration for some skills. But this bring us farther and farther from how this game originally plays; some players have become quite unhappy with us because of this; and some players have become unhappy with us because we have decided to stop changing the skills. We are really in a no-win situation. Thus, we have decided to stop and not move further away from the original game.

Please bear in mind that suggestions made, especially those that impact the game long term, should benefit players in general, and not because one player is too lazy to do something, thus simply just wanting an easy game. Yes, there's a lot we can improve (improvement is a never ending thing, if one so desires to keep on doing them), but we are also limited by time and knowledge (those darn source codes, for example). So I hope players understand that we cannot take up all suggestions/requests but appreciate when we do take your suggestions up.

This server will continue running for as long as someone still play this rather old-fashion "low-tech" game (once, I asked GM this exact question; how long will the server open, and he gave me this answer in these exact words: the server will remain open as long as someone still play the game). The donations received every month, however small, are much appreciated. They help paying for the server hosting and protection. Both GM and Coder work full-time on their real jobs; doing monthly game updates is a side job (rightly so since their real jobs are their main source of livelihood). The mods work to administer the game on a no-pay basis (so please don't be too hard on the mods!

). I, as admin, will be here for as long as I can. If I were to go, the game will stay. If I were not here, the game may still be updated monthly, or it may not. But it will stay. So, don't worry about any unexpected closure of the server (some people like to scare others and say server is closing; please don't listen to them).

I have an opinion for the next patch.
that's to change Gacha field to 'chronos set(eclipse set)' in the next update.
I've been looking forward to 'chronos set' for a long time.
If that happens, i will be very happy.
I also saw a user with 'iris wings' while playing games.
I was amazed at it.
I hope there will be a chance to get it next time if possible.
Thank you for always doing it for the users.

I have an opinion for the next patch.
that's to change Gacha field to 'chronos set(eclipse set)' in the next update.
I've been looking forward to 'chronos set' for a long time.
If that happens, i will be very happy.
I also saw a user with 'iris wings' while playing games.
I was amazed at it.
I hope there will be a chance to get it next time if possible.
Thank you for always doing it for the users. 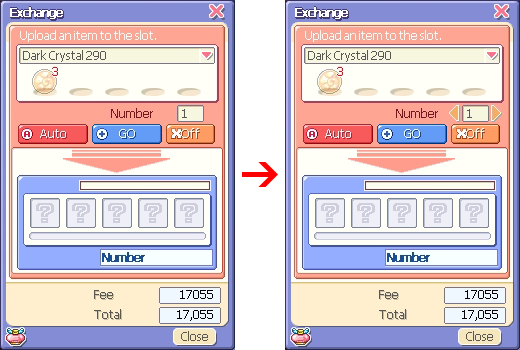 I want 'Exchange' to be able to choose the number just like 'Compound'. 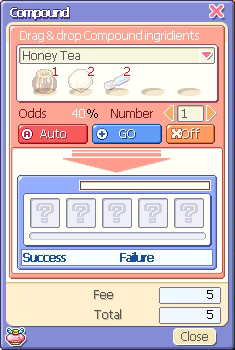 Poppuri drilling and hunting event please!! Thank you for a great patch!