111 replies to this topic

This is done because players say that when they clicked on the pet in game, they get disconnected (DC). It is assumed that this is because the name of the pet is too long.

The Power icon is changed. Basically, this box’s name is “System Overload”, but it looks weird as a name for a box.

Another term used instead of “OL” is “I”, which is “infinity”.

Since there is no item called “infinity” in our server, thus this word is used for the items from this box. The name of the box itself still uses “OL System.”

This item is now salable, tradeable, droppable and can be saved in the bank. Note to players: Base stat types are different between JP vs eTO Mushroom items.

A Touch of Blue Bunny Ears

This event has ended. Tango is kept in game for one more month to enable players to exchange event items for rewards.

This is the same monster found in the map: Alteo Empire Field 2 - Time Cascade.

This monster is level 285. This means players who want to participate in this event must use their good equipment and a char that is not too low.

4. This monster can be found in the following maps:

Edited: Event monsters are taken out from these 2 maps because they are needed for low level quests.

Hunt the event monster in the respective maps and gather as many Candy Baskets as you can.

5. The Candy Baskets can be exchanged for rewards with GM_Wan in Event Garden – Ceremonia as follows: 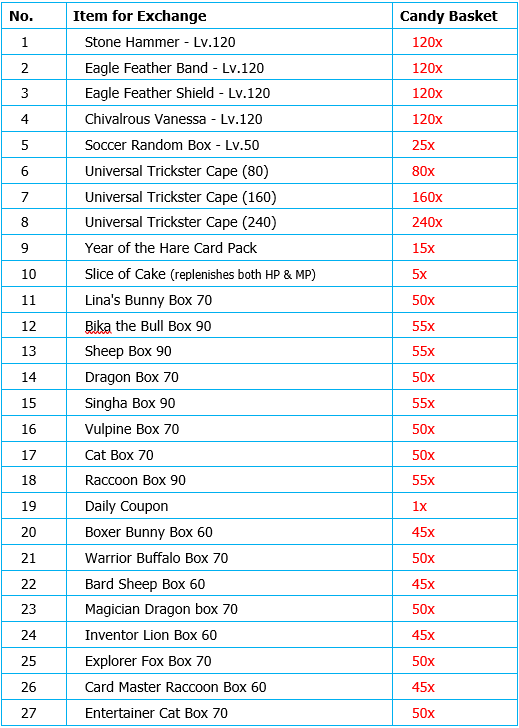 Please report any bug you may find in this thread. If you have any request or suggestion for boxes, please post here as well.

Be good & have fun in game.

Note to [Mod]Hiroto ~ please tell your friend that Kronos Gun can be comped on website now.

Some people seem to have problem with Predator pet. Please ALWAYS log in using Splash run as administrator. (Right-click on Splash and Run as Administrator)

3. Tick box  = Run this program as an administrator

Do checkfile to make sure your client is updated properly.

Please enjoy the skill at lv10.

The Pet is causing numerous bugs and errors. Not all pets are bugged some are and some are not.

Please wait until we give the Okay to buy it.

Update: GM has fixed pet issues. You can now buy the pets from MyShop. For those who bought the earlier pets, those pets may still be bugged. You can exchange those pets with me by sending me your bugged pets through AH. I will replace them with correct pets. ~ aran

Currently web tempering is not working properly for many things.

We will fix these items as soon as we find the cause.

Thanks for amazing patch and for accepted my requests

Thank you for ummm accepting my suggestions!! yepey!!!

Thanks for finishing hard work ( u3u) nice patch as always <3

I have one simple worry : the event monsters are "aggressive".

If they are not aggressive then it won't be a problem wherever they live - like most of the last events did.

But if "aggressive" monsters live in newbies' path (especially path to desert and southwest) they'll have much trouble... in worst case they'll not able to pass through the way safely.

Run fast before faint!!! can be a solution but... I just worried about 'brand-new players'  T-T

_except that, it seems an interesting event!

Your concern about the event monster being aggressive is valid. When we chose this monster as the event monster, it was with the intention of stretching the players a bit by putting in a more challenging monster to deal with. After all, with the high rates offered by this server, it is quite easy for players to level up and with web temper and web comp the way they are, making hax weapon is quite easy. We want the players to apply themselves a bit more when participating in this event. Now, having said that, the map used by low level players (e.g., Path to Desert Beach) may not be a suitable location for this event monster. However, I have observed that not many players go to such maps and low-level players can teleport directly to Megalopolis instead of traversing through the path. I hope that by putting the event monsters in certain maps, more players will go to those maps. For now, we shall keep the event monsters where they are. If this proved to be a big problem in the future, we can move them to other higher level maps. ~ aran

hello, i bought the pet Double Wing Sunny and from that moment i cant enter Myshop, how should I fix it ?

-Please provide IGN  of the account you purchased in case it will be needed later. -Mizzo

I tested this; bought the pet from MyShop, exited MyShop, entered MyShop again, and was able to do so. Then I logged off, relogged, entered MyShop, and was still able to do so. Thus, I do not know how to explain your situation. All I can ask is for you to do a checkfile, make sure your patching is done correctly and completely, then make sure your Splash is run as administrator. ~ aran

Bug report: I think there's an issue with Predator, If you put him in the bank, you will not be able to access it or you will EE. (Yes, even if you run the launcher as admin). I'm not sure if the same applies to the warehouse because I haven't tried it and I don't think I want to find out

Great patch and thank you, Tricksters and rTO team!

Perhaps you could try to empty your item inventory a bit to make more blank spaces relating to your char. Then try to access your bank again. Also, do a checkfile to make sure your client is updated correctly, and always tick run as administrator in your Splash properties. I am at a loss to explain why you encounter this issue because I put my Predator pet both inside bank and warehouse, and don't have access problem. Initially I had ee but once I did a checkfile and ticked run program as administrator in Splash properties, I don't have problem anymore. Also, I make sure I carry only about 100+ items in my item inventory. ~ aran

Thank you hovado for making my demon boy come true ♥ 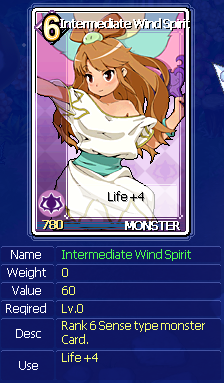 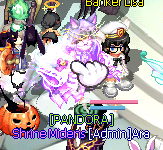 I can't revive or restart in Mirage Island Dungeon 1 - Ocean's End. Is this supposed to happen?

I couldn't screenshot the window, but I was able to open other windows and switch my tabs.

I've even tried double-clicking the resurrect scroll. Said it wasn't currently available even though I was dead /34 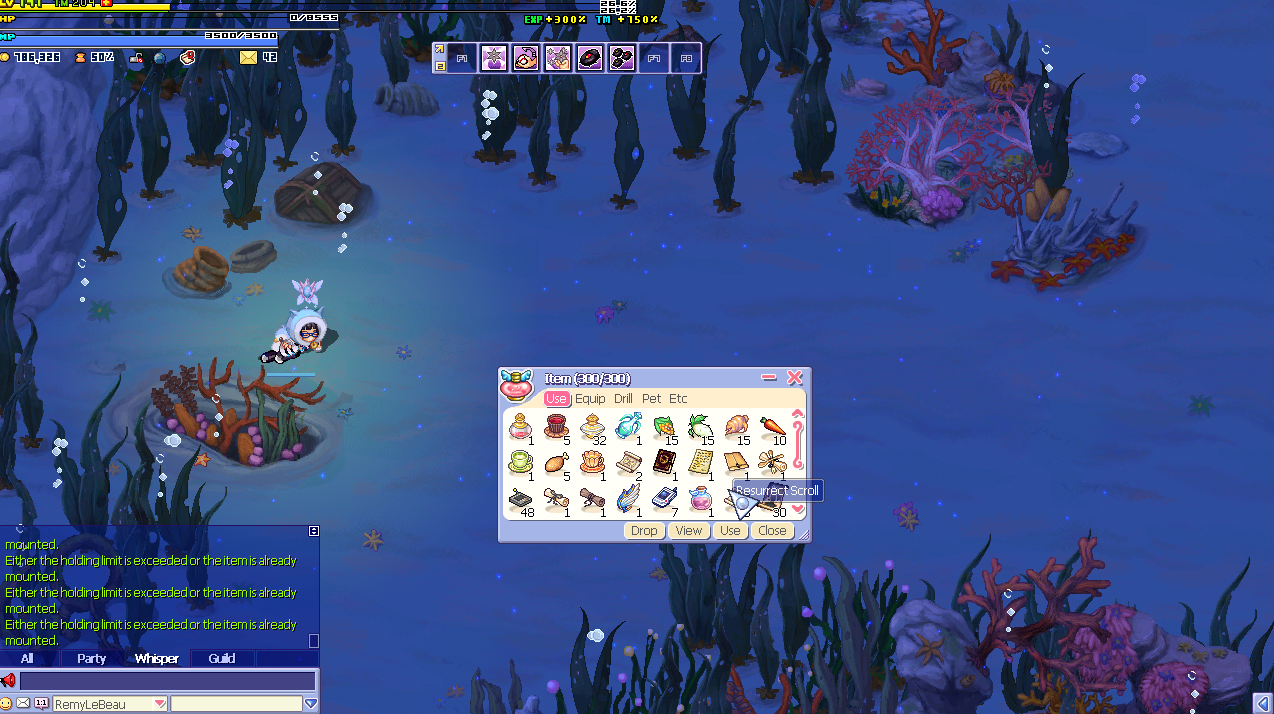 I hope it's not just me. 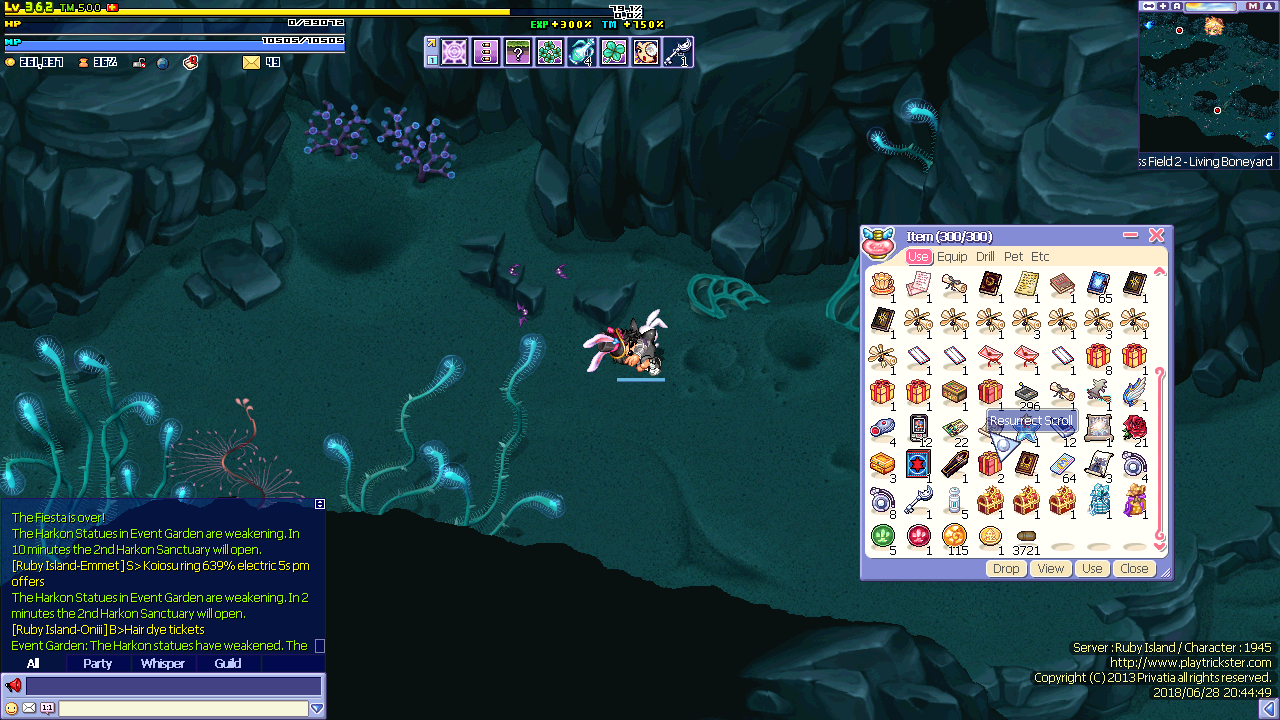 Custom made items cannot be tempered on website, such as this t shirt, and the lvl 300 guns. (and many other items, even goddess items) 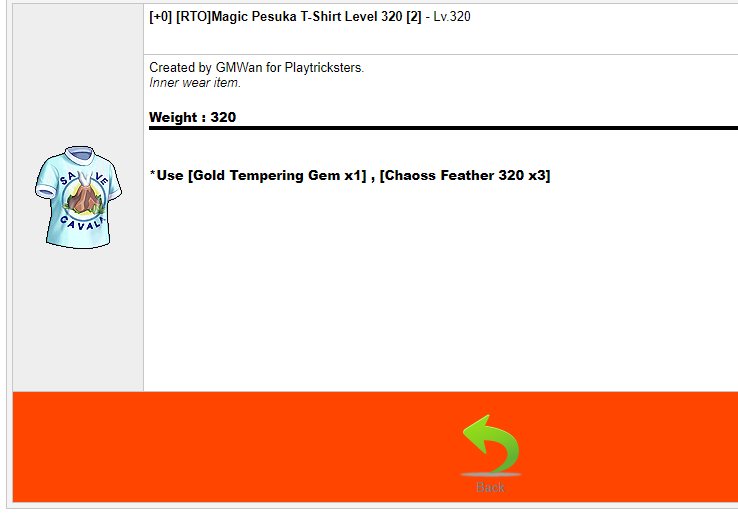 Should be fixed. Please check! -Mizzo

As always, amazing job RTO team! Thank you for listening to my requests <3 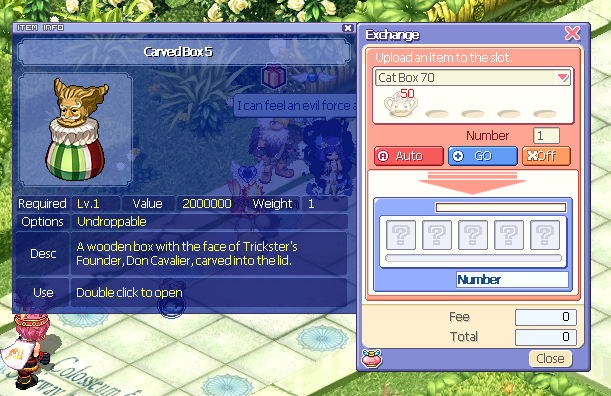 Another slight bug at the exchange NPC in garden regarding Cat Box 70.

Please check your files. Those who patched early during maintenance don't have many things like this fixed. -Mizzo

i have missing item in myshop from gacha, ign Diamond94, missing bunny ribbon and SP field shows 3 gacha coins with flicker drill but use only 2, its not avaible to drill with flicker if i have 2 coins too

The Count Blood pet has always been 15k. -Mizzo

We also need the exact names of the items and the field. Please use the patch links. Thank you Thank you!

Thanks for the update and bringing lv. 300 boss pets and char accessories back!
Also the new predator boss pet skin looks really nice hope it will work soon ~
Was looking forward to master the new special bulls eye skill but if it cant be mastered thats fine the skill helped me alot in Fiesta and boss hunting thanks for the epic Lion skill

Sorry for the double post earlier, here are small requests instead:
- Adding bought and sold galders to auctionhouse log
- Sort Galders under "Buy Galders" by rate per Myshop Point or add a filter option for that purpose

- I sometimes buy alot of Mileage Boxes 30 on website is it possible to increase the amount you can buy at once? At the moment you can buy 20 Boxes at once, increasing the max to 50 or so would be cool

We are not going to overload the website with more functions/features. We will only add fixes-type functions to website when they are necessary (functions that help fix errors encountered in game). Please bear in mind our resources are not unlimited and we try to be as prudent as possible in our resource usage. ~ aran

https://tinyurl.com/Shiomon => Check out my shop and send me offers

My suggestions to next patch:

And is it possible to make the AC special buff be available only for gunners? As i suggested last patch make it 2nd job lion skill (and hybrid foxes only).

Special Bull's Eye skill is a 1st job Power skill, now being assigned to Sense who are gunners. Both lion 1st job and fox 1st job are & can be gunners. Once a char has this skill, they don't lose it, even if they don't use it anymore (in the case of fox thief master). We will not change this skill into a 2nd job lion skill only. ~ aran

The Power icon is changed.

Ohh, that's too bad...
Thank you very much! I really appreciate your efforts! :3

I can't OHKO the fiesta monsters with my lion anymore after the update :/ I have the same gears... Was there any change on the damage calculation?

The monster is the following:

There is this weird thing about fiesta. After maintenance, for reasons unknown to us, sometimes fiesta monsters become stronger. We don't know why this happen because we never touch fiesta files whenever we do maintenance. But I have been told that eventually the fiesta monsters will go back to normal. ~ aran

Also tagged with one or more of these keywords: pavane, laic, mushroom, poros, guardia