127 replies to this topic

Big Rabbit Head should appear under Hat later. Sorry, we overlooked it earlier.

LOL  No worries....I just thought I had completely lost it when I couldn't find it.  Thank you Aran! 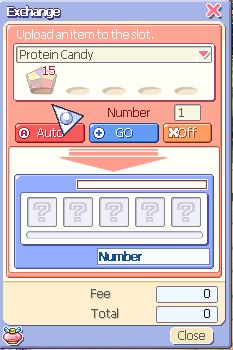 We need to ban GM Sunny for scamming. The Axe wings will stay at level 200, but the Maneki Neko will be changed to level 250 because of its high stats (almost comparable to Universal Trickster Cape 360).

Thank you to everyone who highlighted these comparative stats to me. Originally, we took these wings & their stats from Thai TO without changing anything. We'll make the change in level soon. Bug in the Azhi pet from gacha...

The gacha set used is from Thai trickster and Azhi in that gacha set does not have stats.

We will set up an exchange with GM_Wan at Event Garden where you can exchange the statless Azhi for eTO Azhi with stats. eTO Azhi, however, is level 160.

And so my fox will be fat a bit longer... oh well, guess I'll work on my alts for a bit now that gate of pop is safe to enter again.

I proudly do my own drilling.

What does "not make changes" to you chars mean?

Check out what I'm selling:

Don't delete or rename your chars with tourmalines if you want them counted.

Check out what I'm selling:

Can I suggest a limited-edition version of Artisan's Flame for 5k MS ea maybe that allows fusing for legendary equips and items like Goddess equips / Customised Blood Set?

What about those who bought, tempered and compounded these level 180 wings already?

(it was said, that Maneki Neko wings will stay the way they are now)

If you are not 250 yet, but you are wearing this item now, when the level is changed later, you still can wear the item on you, but once you unequip, you cannot equip it back until you reach 250.

i dont think i would buy it as level 250 cape

i was more concerned about compounds: i comped it with [JP]AP 170 on web (=w/g + w/g EV elixirs), now it could be comped with higher level stones

Of course, when players see them as being on the losing side, they would voice their unhappiness. But if we were to have lowered the level to, say, 150, players would probably keep silent because now they have gained. We have the change the level. If you compared the stats to universal trickster cape level 240 and 360, as well as to the axe wing at level 200, the stats for the Maneki Neko wings is just very high to be only level 180. ~ aran 2017-04-02

when i saw this report, i was waiting for official response

i dont remember it exactly, but it was something about stats from thai server and that it WILL NOT change to fit this server

so i bought them

... and then, that official statement was changed ...

1. Ok, will capture that in next maintenance. Thank you for the info.

2. Violent Gorgon is a monster from Harkon Defence. I don't even know it drops galders. There are monsters in game where galders cannot be autolooted. These are legendary bosses, CT bosses, and the minor bosses, e.g., Punisher Aposis. Perhaps Violent Gorgon falls under this category. I am not an expert re: Harkon monsters.

Is hatching a Spinel supposed to count for the Hatch A Guardian achievement? Because my duke KobayashiDaichi already had a guardian when the new system was rolled out and should therefore be ineligible for the prize.

Ok, I'll report this to Coder. In the mean time, don't click on that Get.

Someone already received the awards of the Tourmaline event ??

No. Shouldn't be. Coder is still doing the thing on website for this. Coder is taking a bit of time on this because he has some personal family matters to attend to atm. I hope everyone can be patient.

The server has been restarted to fix the following:

2. Number of Violent Gorgons in each fields are now increased by 50%.

3. Canna flowers exchange are now done with GM_Wan in Event Garden. GM Sunny has been banished due to pranking people on April Fool's day (scamming using the protein candy exchange).

4. Protein Candy exchange has been fixed.

5. Gacha images have been fixed.

3. Canna flowers exchange are now done with GM_Wan in Event Garden. GM Sunny has been banished due to pranking people on April Fool's day (scamming using the protein candy exchange).

But I liked GM_Sunny... she looked so cute I could hug her all day. :<

Is there an ETA on the tourmaline counting by the way?

I proudly do my own drilling.