85 replies to this topic

The item description for Secret of Megalopolis 2 is interesting.... Rosemary won't let me use it as an exchange item..... Hahaha! 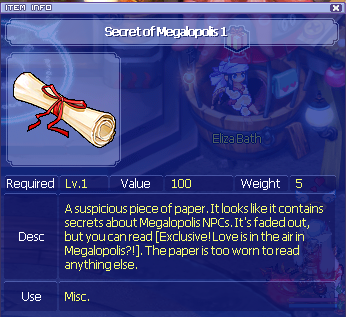 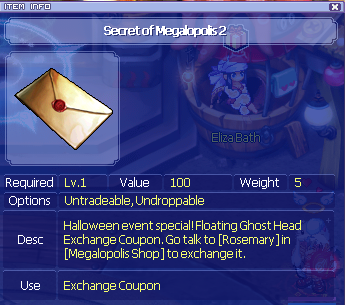 These are quest items for NPC inside the Amusement Park, not for exchange with Rosemary.

I would like to see how the different chars look like when they wear the new wings. If you have one, please could you post a screenshot of yourself wearing the wings here? Thank you

If you could replace the

files for the other Nature wings, that'd be great!

Probably a little late for Halloween, but might I suggest bringing back Box of Regret sometime? (the one that contains the Corvid pet, Stave of Tears, Vindicator's Visage, etc.)

Also does anyone have screenshots for the Araiana Wings?

Looking forward to them! Thanks!

Suggest for gacha for next maint: http://www.trickster...Banker_Hat.html

I wanna suggest to bring back the level 300 accesories, like libya earrings, multiplexed ring and such ^^ maybe le sitar boxes and esplendor boxes

Thank you, and have a nice day!

Yes but those items are no different than the stuff dropped by other bosses. If they did that for Koiosu,

They would have to for all the other boss drops too. So I don't see this happening as it would be unfair

and mess up the game currency market even more than it is as of now it is 9-10 million Galders per 1,000 Myshop points.

If they implemented an exchange system. Galders to MyShop rates will go through the roof as less players will donate.

There are tons of ways to get free modifiers already. They have even changed the level up rewards so you get mileage at certain levels.

If they did implement an exchange for  junk boss drops I could see players taking advantage of the system.

i mean like 1set of soul for a common item. if myshop item let say 10set lol .

it just a suggestion .

webcache doesnt work for me anymore

its just me or its no longer cached?

webcache doesnt work for me anymore

its just me or its no longer cached?

I believe it is no longer cached. As i cannot load it either.

I believe it is no longer cached. As i cannot load it either.

One backup wiki. Please note that not all pages are cached.

In other news, may I ask you all to put the Paula boxes ([JP] Mayor's Mailbox) into consideration for another maintenance? Maybe December or whenever Paula comes out?

1. One backup wiki. Please note that not all pages are cached.

2. In other news, may I ask you all to put the Paula boxes ([JP] Mayor's Mailbox) into consideration for another maintenance? Maybe December or whenever Paula comes out?

1. what a pity that so many pages dont work; lets hope that Tricksterlover will last longer

2. Christmas are going to be awesome

Shattered Amethyst Piece 1 can be drilled at tapasco volcano but i can't store it to bank or storage.

i didnt find it on Tricksterlover, but here is some info:

When this repetition ends behind the window shades
A semi-conscious sorrow sleeping in the bed I've made
That most unrestful bed, that most original of sins
And you'll say that's what I get when I let ambition win again

I made Pokémon themed gear in honor of the current Pokémon hype. Lets hope we might get these in the future!